The use of emoji – small characters used to express emotions digitally – exploded this year, far beyond just smiley faces and hearts from tweens and teens. In fact,

emoji marketing is now one of many marketing tactics deployed by major brands and even a presidential candidate. Emoji are so pervasive that social media platforms are transforming to support emoji characters and monetizing custom emoji advertising campaigns.

Instagram explained in April of this year that nearly half of all captions and comments contain emoji. The increase in emoji use correlates with a decrease in the use of Internet slang. For instance, “lol” is waning while – the most popular emoji on Instagram – is on the rise. Given this shift in communication methods, Instagram made possible emoji inside of hashtags, thus rendering them searchable.

Twitter creates custom emoji for major events and did so as early as the 2010 World Cup. Most recently, Twitter delivered custom emoji for the new Star Wars movies – the first of the three emoji debuted in April of this year – and the VMAs this past August. In September, however, Twitter upped the ante with a custom emoji ad campaign with Coca-Cola, #ShareACoke.

In light of this emoji moment, we explored when it is – and when it is not – appropriate to use emoji.

The key to successful marketing is knowing your brand and knowing your audience; if emoji characters are on brand, messaged to an appropriate demographic and used in such a way that the message cannot be misunderstood, you will unlock the emoji marketing mojo. Here are a few examples of emoji use done right. 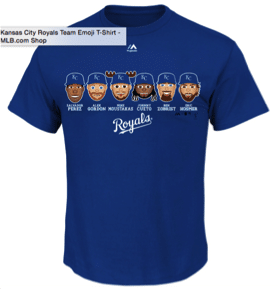 over the medium. To use emoji of favorite players, one downloads the file from the player’s team website. For the final round of All-Star voting this summer, fans tweeted their votes using hashtags that also triggered an emoji of the player for whom they were voting. Dubbed the “Final Vote-mojis,” fans and sportswriters alike enjoyed the new take on America’s favorite pastime. And for a non-digital application, MLB sells t-shirts emblazoned with emoji of the stars of each team. While MLB can’t control how fans will use the players’ emoji, they are managing the brand visual while staying relevant with current trends.

The World Wildlife Fund (WWF) capitalizes on the emoji trend with its #EndangeredEmoji fundraising campaign. The program focuses on 17 animals that are standard emoji on iOS and Android keyboards. Twitter users start by retweeting the WWF’s announcement and for every endangered emoji each participant subsequently tweets, WWF will earmark about 11 cents for the fund. At the end of each month, each participant receives a tally of all the endangered emoji used and can donate based on that tally. WWF found a fantastic way to highlight endangered species, generate goodwill and tap into financial resources of a broad demographic with a minimal donation request. Plus, who doesn’t love the cheeky monkey? 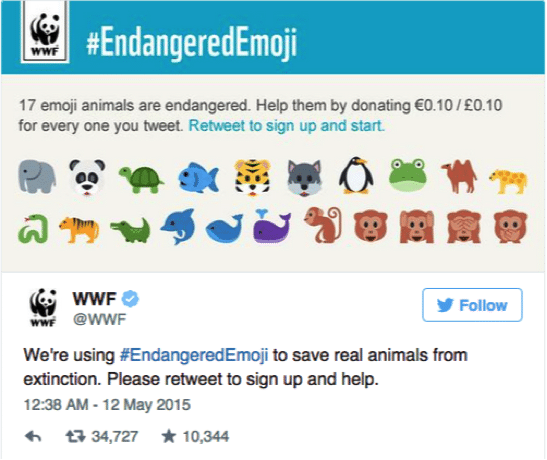 On the flip side, not understanding your audience or straying from your brand image leads to emoji marketing hiccups. Not all brands are hip enough to use emoji, and not all audiences are hip to emoji.

The aforementioned presidential candidate employing emoji marketing received negative feedback when she asked followers to tweet three emoji to describe feelings on student loan debt. Given the trendy take on a serious topic, she came across to some as disingenuous and left herself open to criticism.

To promote a serious research report on the impact of millennials on the economy, “Millennials Coming of Age,” investment-banking firm Goldman Sachs tweeted emoji with a link to the report. The tweet received mixed feedback, and many felt that the bank toyed with trust by mixing frivolous with finance. 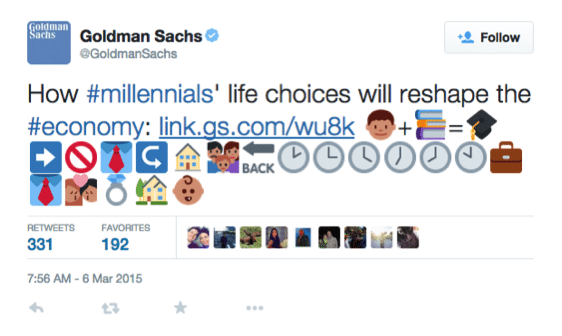 Lastly, not everyone understands emoji. Even those who do understand emoji may not decipher the exact meaning of a collection of emoji. Find timely and entertaining examples on Emoji News, a regular feature of The Late Late Show with James Corden. Before you insert your next emoji, check it out!

So, what do you think about emoji marketing? Major mojo or total no-go?

Or, shall we ask,

One Response to Emoji Marketing: Major Mojo or Total No-Go?