How to Use Periscope and Other Newfangled Video Platforms

When The Buggles song “Video Killed the Radio Star” launched MTV in 1981, who knew that generation would now be wondering how to use Periscope and the other new vi 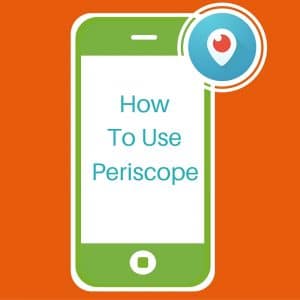 deo platforms of today. Just as the original song has been remixed and remade over its long history, video has transformed in the last few decades, and most significantly over the last few years. In fact, the last year or so has seen the advent of ground-breaking video applications that allow anyone to create videos or broadcast video from anywhere. Let’s explore some of the most buzzed-about video options of today.

Periscope prevails as the most popular video broadcasting service. Recently celebrating its first birthday, Periscope boasts over 200 million broadcasts created on the platform in the past twelve months and 110 years worth of live video are currently watched on the platform every day. Mind boggling, no? Take those as meaningful statistics indicating that learning how to use Periscope makes sound business sense!

In addition to using Periscope, other options abound for live streaming. Facebook Live launched the end of last year, expanding Facebook’s utility to its over a billion and a half monthly active users. Check out our recent post on how to use Facebook Live for the scoop.

While Google remains mum, rumor has it we should also keep an eye out for Google and YouTube’s under-wraps-but-upcoming livestreaming service, YouTube Connect.

Once the shining gem of the livestreaming business, Meerkat suffered as people became more enamored with learning how to use Periscope and Facebook Live. As Meerkat’s CEO explained in February, Meerkat decided to abandon the livestreaming space as it found the “distribution advantages of Twitter/Periscope and Facebook Live drew more early users to them away from us and we were not able to grow as quickly alongside as we had planned.” As such, Meerkat expects to roll out its new, pivoted business of a video social network in the next few months. Stay tuned!

While live broadcasting dominates as one of the most exciting new video tools, a couple of other popular services that allow users to take and share video deserve a mention.

Snapchat, a favorite of tweens and bane of parents, shows skyrocketing growth already this year as it moves from just disappearing images and videos into a platform embraced by savvy professionals and businesses. Not sure what to make of Snapchat and how much time to invest in understanding a snap from a chat or a story? We love Wired’s Snapchat tutorial as a great starting point.

Finally, as we mentioned in our recent post on Instagram updates, our favorite network for mobile photo and video sharing recently announced expansion of video capabilities. Videos of 15 seconds just don’t do artistic justice, Instagram determined, and it will roll out 60-second videos in the coming months.

Now that we’ve covered the basics of the video landscape, and hopefully impressed upon you the scope and significance of video in today’s world, let’s focus on how to use Periscope and other video platforms from a content and business perspective.

Check out our five ideas for incorporating video into your social media strategy:

Lastly, don’t forget a couple of simple, not-to-be-neglected details before you scope, snap or post:

Let us know how you incorporate video into your business’ social media strategy. Any other thoughts, tips or questions on how to use Periscope and all these other crazy, newfangled video platforms?

In the meantime, have fun scoping, snapping, chatting and gramming!