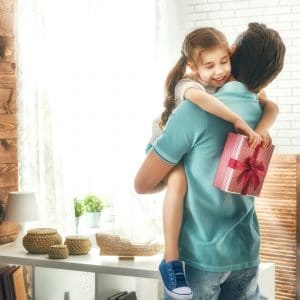 We’re known for sharing online marketing tips on the Roaring Pajamas blog—but in celebration of Father’s Day, today we’re doing something a little different. We’re sharing tips inspired by some of the best dads on the internet!

From motivational morning pep talks to fun photoshoots to hilariously sarcastic tweets, the web is filled with fathers who go above and beyond for their kids—and their internet communities. Today we acknowledge the wholesome entertainment they provide and the viral marketing insight businesses can take away from their presence.

Here are some of our favorite dads on the Internet—and the online marketing tips their success has inspired for us:

Blake Wilson, otherwise known as “BatDad” is a father of four living in Roswell, Georgia. A few years back, Blake thought it would be fun to purchase a $10 Batman mask and film himself as “BatDad”—a gravelly-voiced paternal take on the fictional superhero, who gives advice to his kids and finds every opportunity to startle his wife. Blake was right; being BatDad was fun—and not just for him and his family! The BatDad videos first went viral on Vine, but the appeal has grown far beyond the now-defunct short-form video platform. BatDad now has millions of fans across every major social network and his own book!

Marketing Tip #1: Don’t be limited by a small budget! Consider the props you already have lying around the office that might be used in creative new ways in your content.

In 2013, Atlanta, Georgia-based couple Kordale Lewis and Kaleb Anthony set up a joint Instagram account. Little did they know at the time that sweet snapshots of the two men and their family of four children would eventually garner them thousands of adoring fans, a lot of media attention and a modeling career! In 2014, the duo posted a photo of their “morning routine”, featuring both doting dads styling the hair of their young daughters. The post spread like wildfire, garnering 54,000 likes and 6,000 comments within days. Though the couple claims life hasn’t changed much for them after going viral, they have since booked a major fashion photo shoot that included the entire family.

Marketing Tip #2: Highlight diversity in your images. Representation matters and will connect with a wide array of customers.

Ryan Reynolds—yes, that Ryan Reynolds—is not only hilarious and talented as an actor, he’s got quite the take on fatherhood, too. He regularly shares his fatherly musings with his followers on Twitter, much to everyone’s delight. Not long after his first daughter was born in late 2014, Reynolds took to the social networking platform to share thoughts such as “Tip: It’s important parents take little ‘time outs’ for themselves too. Even if you feel pretty guilty when you return 14 years later.”, and “I’d walk through fire for my daughter. Well not FIRE, because it’s dangerous. But a super humid room. But not too humid, because my hair.” For obvious reasons, fans (including us!) love his irreverent, sarcastic take on fatherhood.

Marketing Tip #3: Don’t take yourself so seriously! Have fun with your social media content and your audience will too.

We’d all be destined for greatness with pep talks from Ron Alston! The father became internet famous after sharing a video of his daily motivational speech with his young daughter, Aliya. “I am strong. I am smart. I work hard. I am beautiful,” Aliya repeats after her dad as she faces her own reflection in the mirror. Alongside the video, Alston also shared: “Starting off with positive affirmations can set a great tone for how your day unfolds. Learning this from an early age can be very beneficial in the esteem and confidence of a child.” We couldn’t agree more—and neither could the rest of the 17 million people who have viewed the video since.

Marketing Tip #4: Give your customers a glimpse behind-the-scenes—what daily routines keep you and your team productive and happy?

Jason Lee is not only the father of two adorable little girls; he’s also an incredibly creative and talented photographer. Lee started taking photos of Kristin and Kayla to share with his mother when she was sick in the hospital, but the audience for his collection grew far bigger once he started sharing his shots on the internet. One photo shows his older daughter having “taped” her younger sister up on the wall. In another, the two girls are dressed up as Angry Birds from the titular game, with his youngest daughter appearing to be tossed in the air toward a pile of pigs. With clever ideas and a liberal use of photoshop, Lee created fun, fanciful worlds for his girls—and for the rest of the world.

Marketing Tip #5: Get creative and try something new! Try to think of unusual, out-of-the-box ways to look at the same thing—your product or service, in this case.

Dave and Claire Crosby are an adorable father-daughter duo. Dave has been singing the same lullaby to Claire every night since she was born and, one night in 2014, Claire surprised him by singing along word-for-word and hitting every pitch. After Dave posted a video singing a song from The Little Mermaid alongside his four-year-old daughter, the internet went crazy wracking up over 100 million views and eventually landing the singing pair on The Ellen Show—twice! Dave and Claire have continued to give the fans what they want, singing and sharing more songs from Toy Story, Moana, Tarzan and Tangled, amongst others.

Marketing Tip #6: Collaborate with non-competitive businesses or influencers who share your audience, and also want to share the spotlight.

What online marketing tips will you take away from our favorite dads on the internet? Share your biggest insight—or favorite Internet-famous father!—with us in the comments below.